The Forgotten Gas in Need of QLM’s Methane Monitoring Technology

Global Net Zero policies, whilst understandably focused on carbon emission reduction targets, have forgotten the potency of methane and its growing contribution to climate change. 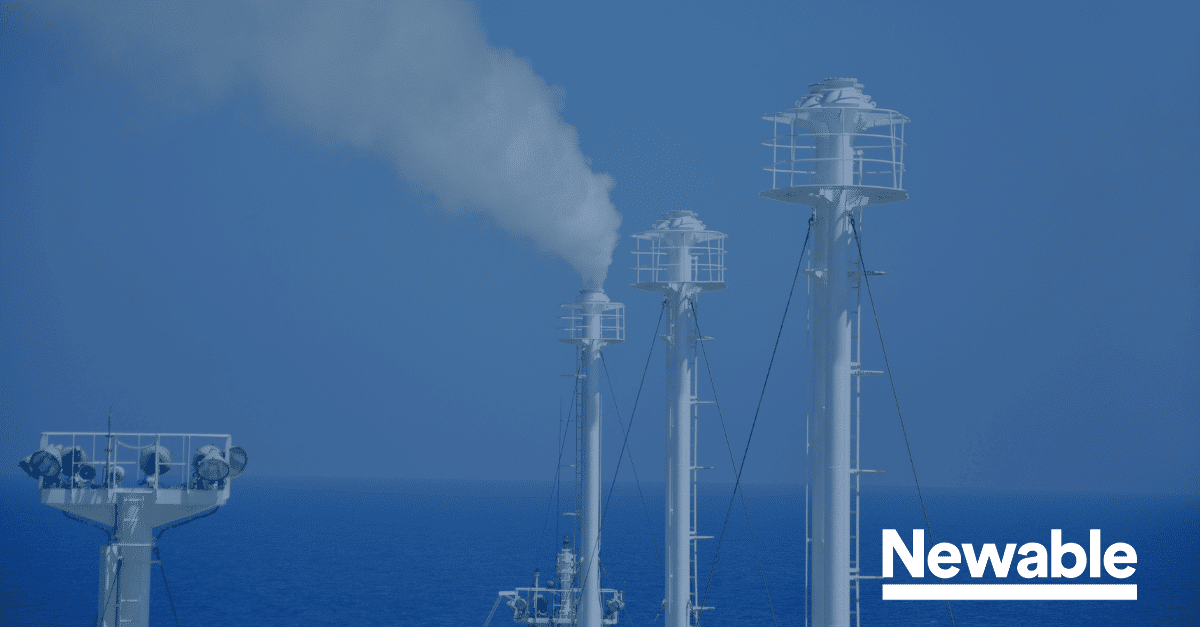 Bristol based start-up QLM Technology (QLM) is on a mission to turn the tide against methane, by first revealing the scale of methane emissions.

Methane forms when organic matter decomposes in oxygen-poor environments and is emitted from both anthropogenic (man-made) and natural sources; with over 50% of global methane emissions coming from human activities, such as fossil fuel production, animal husbandry, agriculture, biomass burning and waste management. Natural sources of methane include wetlands, gas hydrates, permafrost, termites, oceans, non-wetland soils, and other sources such as wildfires.

Methane actually makes up a tiny proportion of the Earth’s atmosphere, 0.000187 per cent to be precise, however, by being 27 times more potent than CO2 at trapping heat in the atmosphere, Methane emissions contribute to over one-third of today’s human induced global warming. 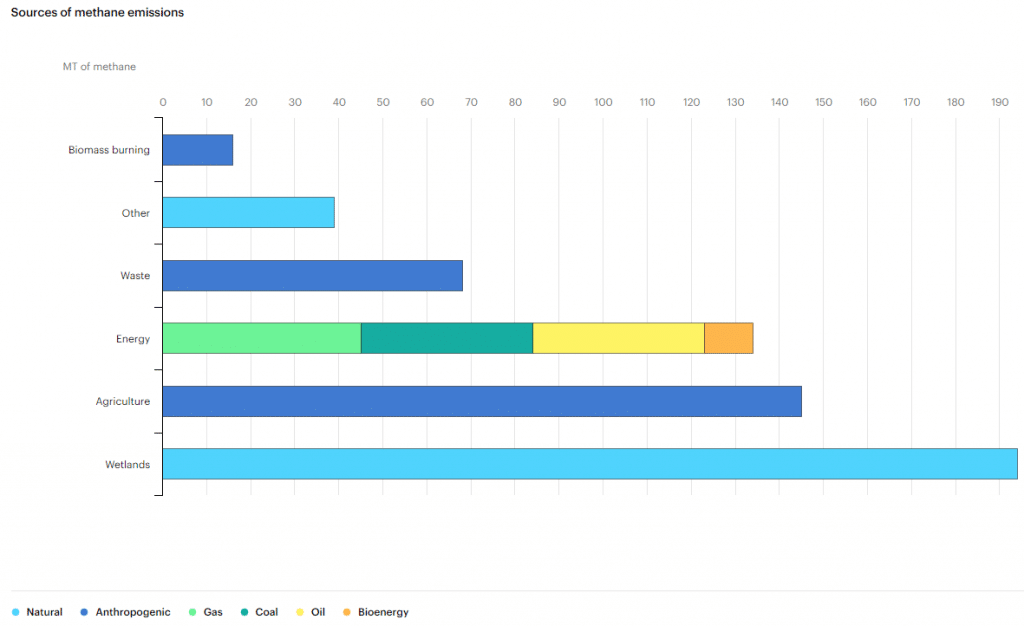 Is Methane’s contribution to global warming set to grow?

As the world’s population grows, so inevitably will methane emission sources. When it comes to waste (the fourth largest contributor to methane emissions) the world generates 2.01 billion tonnes of municipal solid waste annually, with at least 33 percent of that—extremely conservatively—not managed in an environmentally safe manner. The World Bank, notes in its forecasts that global waste is expected to grow to 3.40 billion tonnes by 2050, more than double the population growth over the same period, adding that there is a positive correlation between waste generation and income levels.

The burning of fossil fuels paints a similarly challenging picture. In 2018, fossil fuels made up 85 per cent of global energy consumption, with increasingly cheaper sources of renewable energy yet to make a dent in global energy consumption. Ironically, despite methane’s known risks, it is increasingly being touted as a “bridge fuel” to help smooth the transition to a carbon-neutral energy future for developing nations struggling to wean themselves off coal, while renewable or carbon-negative technologies develop.

Agriculture’s battle with methane emissions is well documented, from the light-hearted observation of cow burps, to the more serious aspects of industrial quantities of animal waste and manure. Furthermore, the difference in CO2 contributions between developed and undeveloped nations is startling. Between 1990 and 2012 the EU’s emissions from agriculture fell by 24% due to a significant decline in livestock numbers, more efficient application of fertilisers, and better manure management. However, agricultural emissions in the rest of the world moved in the opposite direction. Between 2001 and 2011, global emissions from crop and livestock production grew by 14%. The increase occurred mainly in developing countries, due to a rise in total agricultural output. This was driven by increased global food demand and changes in food-consumption patterns due to rising incomes in some developing countries. With the developing world’s insatiable desire to mimic high income lifestyles and diets, methane emissions from agriculture look set to rise.

This leaves wetlands, the world’s largest methane emitter. An EU Joint Research Centre (JRC) 2020 study estimated that natural CH4 emissions from wetlands will increase by 50%-80% in 2100, if no actions are taken to reduce anthropogenic greenhouse gas emissions. Rising temperatures, higher water tables, and the emergence of new wetlands due to the thawing of permafrost all contribute to swamps, marshes and bogs releasing more methane into the atmosphere.

Are There Existing Methane Monitoring Systems?

Most methane monitoring systems available today are poor quality. Leak detection equipment and repair programs take place intermittently and involve time-consuming walkover studies that only provide a snapshot of an energy plant. If a piece of equipment leaks the day after the survey, it is missed until the next one. To achieve Net Zero, continuous monitoring is required, but no current solution offers the combination of detection, localisation, quantification, and deployment at scale.

It is QLM’s mission to change this. Based in Bristol in the UK, QLM seeks to enable organisations to achieve Net Zero through the mitigation of greenhouse gas emissions. The company was founded by their CTO, Xiao Ai, based on his postgraduate research at the University of Bristol. Their quantum technology incubator, QTEC, paired him with a business mentor in the form of Murray Reed, a Silicon Valley veteran with industrial laser experience, who became QLM CEO. Helping guide the company are, co-founder world-renowned quantum optics expert, Professor John Rarity, and Chairman, Bernie Bulkin, who has held a variety of executive positions with BP. 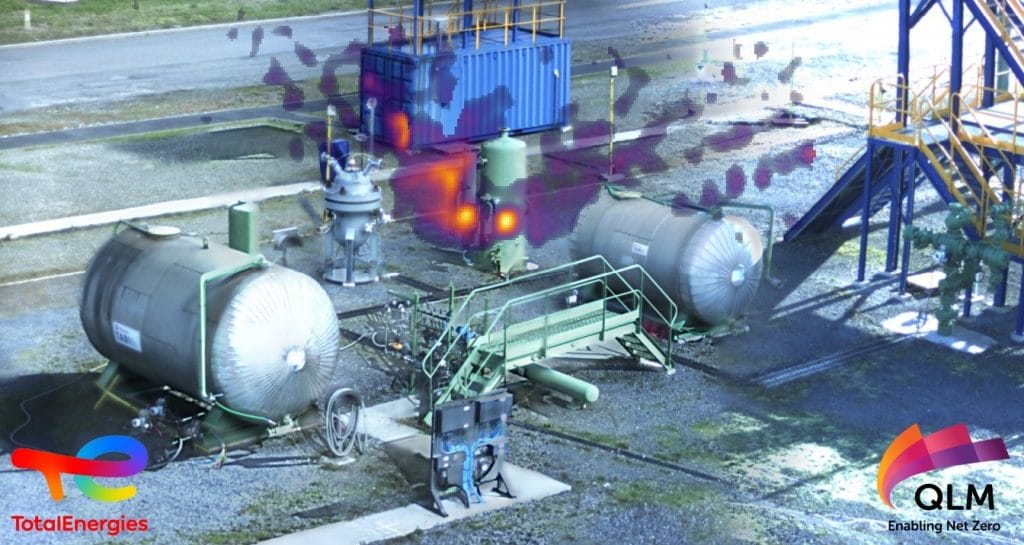 QLM’s technology takes Lidar, a range-finding technology being refined for the autonomous vehicle industry, and combines it with single-photon detection technology, capturing the tiny backscatter from the Lidar with a quantum Single Photon Avalanche Detector (SPAD) and processing it spectroscopically. Matching the Lidar wavelength and detector to the absorption wavelength of methane delivers a low-power, eye safe, highly sensitive camera that can see and measure specific gases with exceptionally long range. Lidar has undergone dramatic cost and size reductions over the last decade so QLM’s camera is already low cost and will see rapid reductions in price as manufacturing scales in the future.

The first product QLM is developing is a methane specific camera that can be deployed on a pan-tilt mount on a mast or tripod to allow surveying around the surrounding area. It is able to measure the gas from down at the background ambient methane, all the way up to major super-releases, at a range of up to 200 metres. The internet-of-things camera runs with an intuitive browser-based graphical user interface and uses wind data from an attached anemometer to calculate any observed leak’s flow rate. This performance has been tested using controlled release studies, notably at the National Physical Laboratory in the UK and Total Energies’ TADI facility in France, where blind releases of methane were accurately detected, localised, and quantified over a wide dynamic range.

Controlled release studies can only go so far. QLM is also working with real-world sites to further demonstrate the effectiveness of the camera’s performance. Industrial validation of the technique is a driving force behind the Innovate UK SPLICE project, a multi-stakeholder consortium led by QLM with technology, academic, government and industrial partners, with the intention of taking the equipment from a laboratory bench out into the commercial world. Consortium members BP, the National Grid and AMETEK Land are providing crucial real-world test beds including the National Grid’s Bacton Terminal facility.

Outside of SPLICE, further industrial traction is also being generated. Bloomberg NEF named QLM among the 2021 BNEF Pioneers – a cohort of companies answering challenging questions about the fight against climate change. QLM has successfully closed a seed round of funding for £3.1 million from a consortium representing both green technology and oil and gas interests (including Newable Ventures).

This Seed funding will take the camera into production to meet the rapidly growing demand. QLM is currently completing the design and qualification of the methane camera to the environmental robustness and certified compliance requirements that the industrial customers need. The fully validated methane monitor product will be manufactured in volume by specialist UK photonics and electronics contract manufacturers who are partnering on this development.  QLM is building a comprehensive test facility to complete application specific integrations and guarantee outstanding system quality and reliability.

QLM’s versatile platform will work in many other areas. Monitoring other greenhouse gases like carbon dioxide and pollutants like ammonia is being demonstrated. The ability to fully automate detection, characterisation and reporting of greenhouse gas monitoring and incorporate it into site safety systems is under development. The camera has been deployed on UAVs and it is expected that drone-based cameras will complement the continuous fixed-emplacement systems. Units that can be deployed into hazardous areas, used as handheld videos, and attached to vehicles are all-natural next steps. 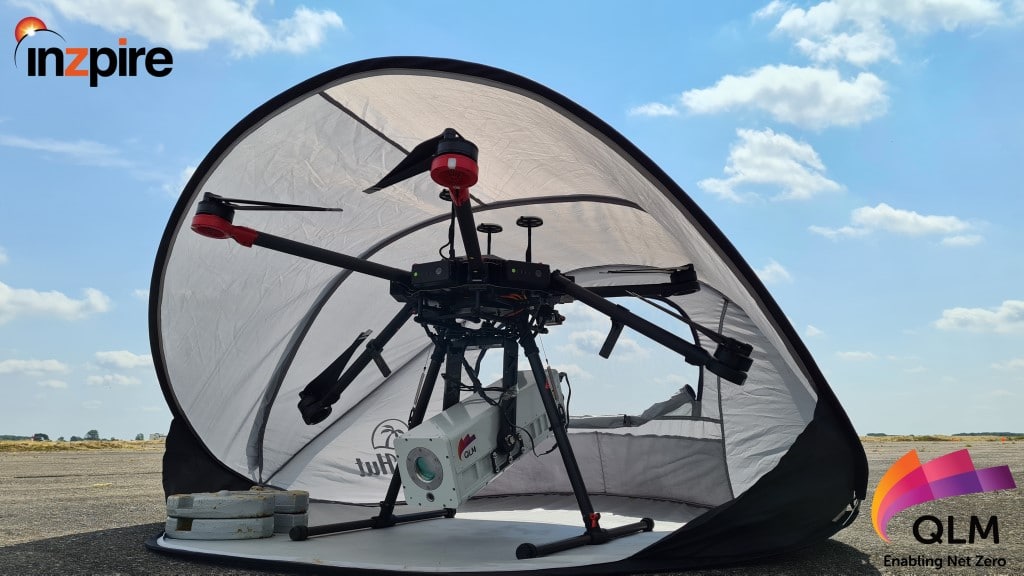 What is QLM’s long-term vision?

As the world moves towards Net Zero, pressure is increasingly being applied by governments and investors on industrial emitters of methane to employ more effective mitigation strategies. The current global methane leak detection market exceeds $1.5 billion per year, both from traditional oil and gas and petrochemicals operators, and from more diverse sources of natural gas in blue hydrogen production, landfill gas recovery and biomethane generation.

QLM’s technology will be critical to enable organisations to achieve Net Zero through measurement and mitigation of greenhouse gas emissions. With full commercialisation of the equipment scheduled for 2022, QLM is well-placed to provide an industrially scalable solution to methane monitoring at precisely the right time.

Find out how Newable Ventures can help your business.