This month's Newable Ventures client profile is on The Electrospinning Company Ltd; a leader in the development and manufacture of nanofibrous biomaterials for use in tissue regenerative devices. 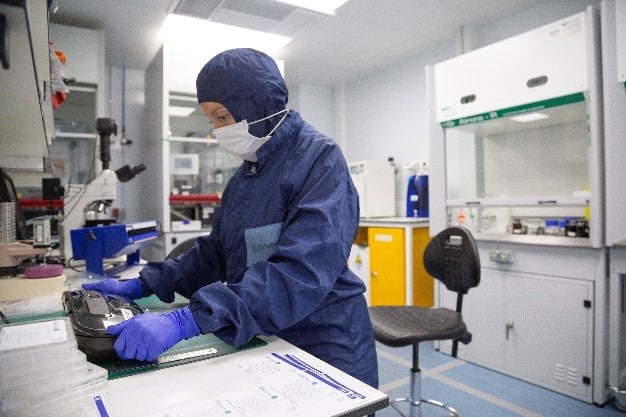 The development of nanofibrous biomaterials

Electrospinning operates a contract development and manufacturing business model, serving a range of customers across the world with projects in different therapeutic fields. The company has the ability to tailor polymer architecture and structure to create nanofiber and microfibre materials suitable for different therapeutic applications. Electrospinning’s materials are being used in FDA-approved devices.

Electrospinning is also developing proprietary materials for targeted out-licensing opportunities. The Stealth™ T-bag, for cellular therapies in diseases such as Type 1 Diabetes and Parkinson’s Disease, allows healthy donor cells to be implanted into a patient’s body, while keeping those cells isolated from the patient’s immune system. The Symatix™ membrane mimics the performance of natural human amniotic membrane in eye surgery and for wound healing applications but promises to be more available, affordable, and consistent.

Electrospinning was originally spun out by the UK Science and Technology Research Council (STFC) in 2010 and developed its technology platform with the support of business angels including Newable Ventures before bringing a VC and now a strategic investor on board.

The building blocks of being able to bring on strategic investors however came from the angels who invested at the early stage and provided advice, a network of key contacts in the biotech sector, as well as the capital which “although of huge importance to the company, was matched in importance by the unique combination of experience and knowhow by the angel cohort” according to Ann Kramer, Electrospinning Company CEO.

So, what has the journey been from starting out as a university spin out?

The company has been ISO I3485:2016 medical device quality certified since 2015, which is essential for manufacturing biomaterials that can be implanted in humans. Shortly after Electrospinning started supplying the first electrospun biomaterial incorporated into an FDA-approved medical device which has been sold in the USA since 2016. The same product was recently been launched in Japan.

In 2018, the company moved into their own purpose build facility in the Harwell Innovation Campus with Class VII clean rooms. In collaboration with ASTM International in the USA and BioRima in Europe, Electrospinning has contributed to setting the standards for synthetic biomaterials. The company has also grown a team to 20 employees whilst maintaining a 50:50 gender ratio, enabling the company to file applications for six patent families and securing two granted patents.

What does the future hold?

The long-term ambitions for the company are to be a market leader in nanofibrous biomaterials for regenerative medical devices. This goal is supported by an increased awareness of biomaterials in general, and on nanofibrous scaffolds particularly as tools for addressing the problems faced by aging populations and cash-constrained healthcare systems.

With the company confidence that there is a clear market fit for their products, and the additional record funding Electrospinning received this year, the company will be expanding their cleanroom capacity at Harwell and adding further engineering capability to support the manufacture of medical device components. In addition, the funding will be used to enhance the proprietary technology platform, extending the range of applications in which the Electrospinning biomaterials can be applied and, in the process, increasing licensing opportunities.

Find out how Newable Ventures can help you.